We spend about one–third of our lives sleeping. Sleep invigorates our body and mind, as well as supporting our immune- and nervous system. Without sleep, we would be unable to process our thoughts and emotions and keep track of our memories. Insufficient sleep increases the risk of health problems drastically. Those include depression, cardiovascular disease, high blood pressure, diabetes, and obesity. Sleep is, therefore, an indispensable part of our life, a foundation of both physical and mental health.

Even though most people may be aware of this to some extent, few people bother to get enough sleep. School and work performance are greatly affected by lack of sleep, and our mental health suffers even more. Sadly, many have become accustomed to this state. Constant fatigue, lack of concentration and mood swings become part of their daily life, preventing them to show their full potential, even without realizing it. But what is it about sleep that is so important?

When we sleep, we cycle through each of those stages several times, every sleep cycle being around 90 minutes long. As it draws near morning, the REM-sleep stages become significantly longer, while the NREM-sleep is more prominent early in the night.

Both the NREM-sleep and REM-sleep play a crucial role when it comes to memory consolidation and our ability to learn and absorb new things. 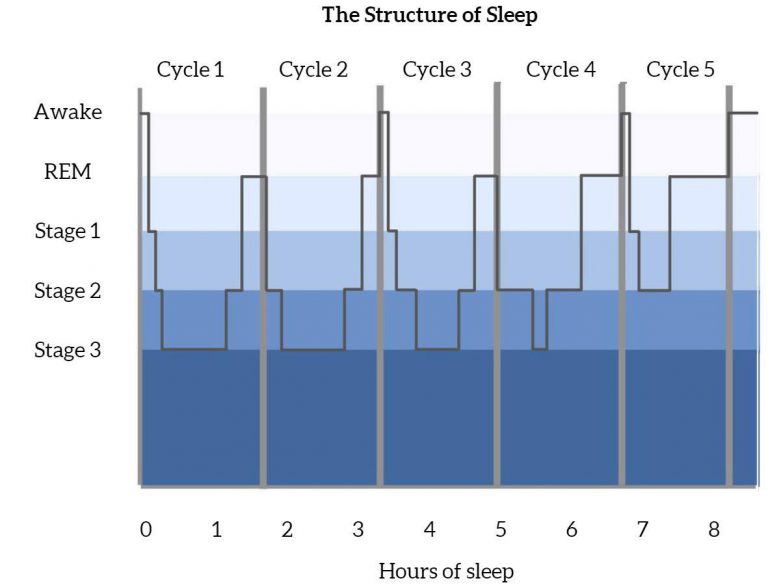 Stages 1 & 2 (NREM)
The first two stages are defined as light sleep. Here, our heartbeat and respiration slow down, our muscles relax with occasional twitching. Body temperature drops, and our eyes stop moving. Brain wave activity starts to slow down but shows brief bursts of electrical activity. Here you are easily awakened. We spend the most time in light sleep.

Stages 3 (NREM)
Stages 3 are defined as deep sleep. Deep sleep is essential for us to feel invigorated once we wake up the next morning. Our heartbeat and respiration drop to their lowest level and our muscles relax even more than in light sleep. Brain wave activity slows, showing long, steady waves, and our blood pressure drops. In this stage, the lymphatic system of the brain becomes active, removing waste from your brain and making sure everything is intact for the following day. Muscle growth and repair also takes place in deep sleep. You will have difficulty waking up during this stage.

REM-sleep
As the name indicates, REM-sleep is characterized by rapid eye movements. However, the rest of our muscles are in a temporary state of paralysis. This prevents you from acting out your dreams while sleeping and gives your muscles time to rest. During REM-sleep, our heartbeat and blood pressure levels increase, and breathing becomes faster. Our brain activity increases drastically, resembling the activity we see in wakefulness. Our sleep pattern alters through our life, for example, newborns spend way more time in REM-sleep, but that time decreases as we get older. 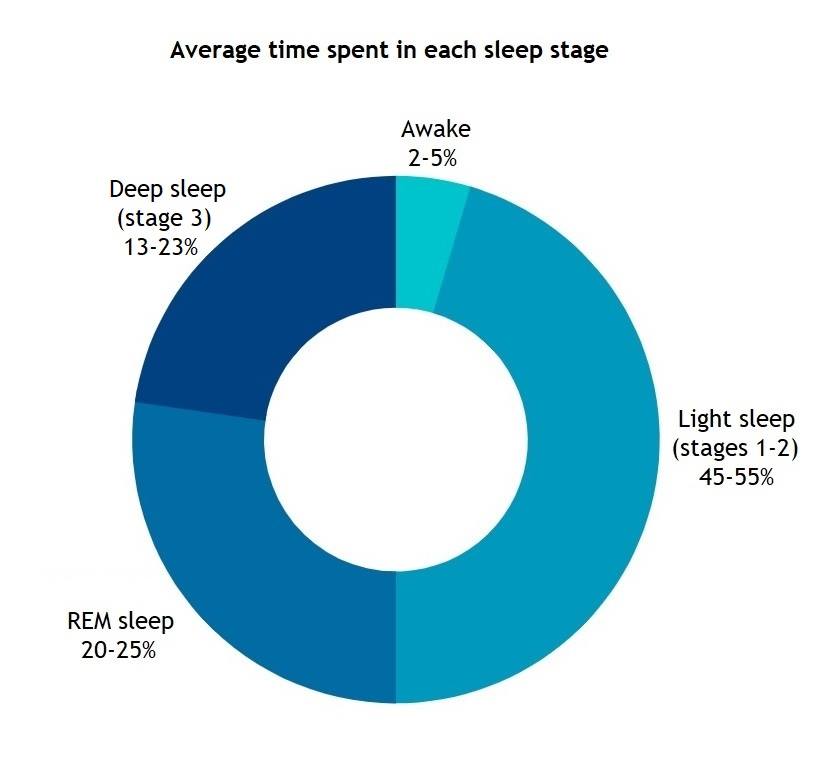 Near all our dreaming takes place in REM-sleep. We spend about 2 hours every night dreaming, even though we might not remember it when we wake up. It is still not clear why we dream, nevertheless, REM-sleep has been associated with memory- and emotional processing, as well as promoting our creativity and problem-solving ability. Some scientists believe dreams to be essential when dealing with bad or even traumatizing memories, as well as serving as a link between old memories and recent events, showing us things from a new perspective. However, these explanations are only theories, still to this day, dreams remain a mystery.

Contrary to what many people believe, our brain is highly active during sleep. Several structures within the brain play a
significant role when it comes to sleep.

The suprachiasmatic nucleus (SCN) is located within the hypothalamus in our brain. It consists of thousands of cells, forming a cluster that can receive and process information about light exposure directly from our eyes. Using that information, the SCN can control our circadian rhythm, adjusting it to light exposure. The SCN than forwards the information to a part of the brain called the pineal gland. The pineal gland receives the signals and, if needed, produces melatonin, a hormone that we produce once it starts to get dark, informing our body it is approaching bedtime.

The hypothalamus then communicates with the brain stem, located at the base of the brain. The brain stem controls the transitions between wake and sleep by producing a chemical called GABA (gamma-aminobutyric acid). GABA is an inhibitory neurotransmitter that acts to reduce the activity of the arousal centers in the brain, allowing us to fall asleep. The brain stem also sends signals to relax your muscles during REM-sleep, to make sure we do not act out our dreams.

The basal forebrain also controls sleep and wakefulness, by using the compound adenosine. For every moment that we stay awake, adenosine keeps piling up in our brain, binding to certain receptors that gradually increase our need for sleep. Eventually, this need becomes so strong that sleep
becomes inevitable, whether we like it or not. However, the receptors in our brain can be tricked, a solution that many people take advantage of every day. Caffeine binds to the same receptors as adenosine, blocking its
actions and allowing us to stay awake even though the amount of adenosine has come to a critical point.

The thalamus acts as a messenger between the senses and the cerebral cortex, the part of the brain that interprets and processes information regarding our memory. The thalamus is dormant during most of our sleep, but during the REM-stage it becomes active and starts sending information to the cerebral cortex that makes its way into our dreams. The amygdala, which is involved in processing emotions, is also highly active during REM-sleep. Thus, we assume REM-sleep to play a crucial role when it comes to our memory and emotions.

References and further information can be found here: